Home/Uncategorized/Food and Exercise: Using Your Resources Wisely
Previous Next

Ideally, we’d eat organic all the time, as organically produced foods contain no harmful chemicals, plus they are more nutritionally dense. However, lack of availability and higher costs can prevent us from eating a 100% organic diet. The good news is we don’t have to be 100% organic to avoid cancer, heart disease, stomach problems, fatigue, or toxic symptoms like brain fog or lack of motivation or stamina. The Environmental Working Group (EWG) released their list of the most chemically-laden produce, which they nick named “The Dirty Dozen.”

The point of the list is to help people identify which foods are likely to be the most toxic and to encourage people to buy the organic versions of those items. Please look at the list and determine which foods you routinely eat are on the list. For these items, it would be wise to purchase organic produce. The list is as follows: 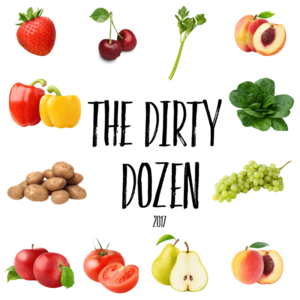 To give you some context, more than 98% of strawberries, peaches, nectarines, and apples tested positive for at least one pesticide residue. Also, EWG reported the average potato had more pesticides by weight than any other produce. The group also reportedly said that while hot peppers and leafy greens like kale and collard greens didn’t meet the criteria to be ranked on the list, toxic insecticides were found on some of the samples.

The EWG also lists “The Clean 15,” which are those items that have no pesticide residue. Therefore, buying organic would be overkill. Save money on The Clean 15 and apply that savings to investing in the organic versions of the The Dirty Dozen. Which fruits and vegetables made the Clean Fifteen, you ask? Take a look:

Please Remember Dr. Tim does suggest anything that he does not do himself!

In addition, I am reading a book called The Great Cardio Myth by Craig Ballantyne and would like to share information that might shock you. There are many things we live our life by that are false. The most dangerous things are not the ones we don’t know to be true; they’re the things we think we believe are true that are actually false. Here are the four biggest myths about exercise.

MYTH: Exercising at a low or moderate intensity, at a continuous pace, will deliver the best fat loss and aerobic endurance benefits.
FACT: Varying your intensity is often a more effective way to get results. Think peaks and valleys, if you were looking at a cardio machine monitor, rather than a steady level of intensity.

MYTH: There’s nothing wrong with watching TV or reading while getting your daily exercise in.
FACT: Multitasking can foster low exertion and poor form. Low focus and low exertion are two reasons cardio, especially when done on a machine, fails to deliver benefits.

MYTH: A person needs to exercise for at least twenty minutes before fat burning kicks in.
FACT: The fat-burning zone idea is misleading, and studies have proven that people can lose fat with as little as four minutes of high-intensity exercise per week.

About the Author: Dr. Tim Strittmatter